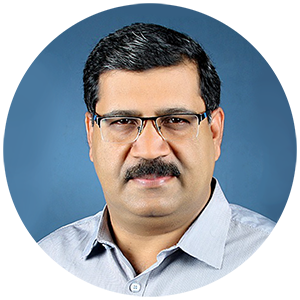 About Me
P. Praveen Kumar- has an experience of 27 years in the field of Mineral Exploration and Marine Geology. He was one of the pioneering geologist to map Lakhsadweep group of Islands . In 1990s he worked in Gold Exploration projects, Granite Exploration Project and in Specialised Thematic mapping projects in Kerala and Rajasthan. Since 2000, he worked as a marine geologist in GSI and specialised in Coastal Geotechnical Projects, offshore Sand and Heavy Mineral Exploration Projects and Coastal Erosion studies. He has proved his mettle as the Head of Research Ship Management division of GSI and is credited for efficient management of large professional teams and different entities across the globe to work towards a common goal, in a cost effective and time bound manner. He voluntarily retired as Director ( geology) from Marine and Coastal Survey Division of Geological Survey of India, Cochin. Since his joining in Geo Marine in 2019, he is the team leader for Hydrographic and Geophysical Surveys for the Port Survey projects in Qatar , Marine Sand Resource Survey in offshore Qatar, Sand resource survey in rivers of Karnataka State and for Siltation and carrying capacity studies in Various Reservoirs in India.
Expertise
Mineral Exploration and Marine Geology100%
Reservoir siltation analysis100%
Project coordination100%